The Right to Know -- Perspectives of an Adult Adoptee 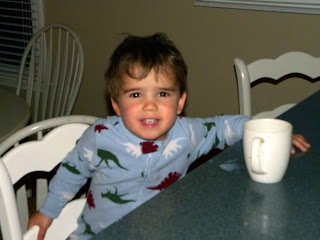 The impact of genes -- my grandson looks just like his dad!

Recently, Deanna Shrodes on her website Adoptee Restoration interviewed therapist Karen Caffrey, LPC, JD, about the inner struggles many adopted adults have experienced. Caffrey specializes in working with adopted people, and her insights certainly resonate with me, an older adoptee who was relinquished over 60 years ago.

Caffrey says: "The longer ago the adoption took place the more likely the adoption was closed ..., and taking place in a culture when harmful adoption myths were even more prevalent than they are today. Thus most adult adoptees have grown up in a situation where one of their most important human needs, that being the need to know their origins, has been unmet. Basic, factual information is typically missing. (viz. - What is my nationality? What do my blood relatives look like? Where are they? Why am I not being raised by them? ) Even more damaging is that an adoptee’s natural need to ask questions about herself was often responded to by her adoptive parents (and others) with shaming, fear, hurt, judgment or unreality."

My personal experience reflects Caffrey's thoughts. I must have been about seven or eight years old when I asked my adoptive mother where "my real mother was."

Obviously, I didn't have the sophistication then to ask my questions in a politically sensitive tone! I just wanted to know where my first mother was and why she felt unable to keep me. My mother in her response was uncomfortable and evasive, and later that night my father came to me and said, "You know -- that really hurts your mother when you ask where your other mother is. She thinks of herself as "your real mother."

I must have internalized that lesson in a powerful way, because I never asked my adoptive parents -- who did love me, I know -- about my original family again. I didn't know exactly why, but that territory, evidently, was a place where I wasn't supposed to go.

Caffrey says that "adopted children tend to draw all sorts of mistaken conclusions" from such exchanges, such as:

I don't blame my adoptive parents for their inability to delve deeper into adoption issues, because the "professionals" of their era counseled them that an adoptive family is just like any other, and that infants come to the parents as "blank slates."

But what I learned from the closed adoption system is just what Caffrey articulated. I learned that I shouldn't ask questions because I make people uncomfortable and sad when I do. I learned that what I think I need is apparently unimportant and upsetting to others, so there must be something wrong with me. And probably most important, I learned that my innermost feelings don't make sense in this world of adoption, so I better keep them to myself.

Unfortunately, it took me years and several bouts of depression to recognize that there was nothing wrong with my questions or my feelings -- the problem, rather, lies in the adoption system itself, a system that is still predicated. unbelievably, on amended and legally sealed birth records.

As Caffrey relates, it takes many adopted people a long time to recognize that their struggles may be adoption-related, because "simply put, they've been explicitly or implicitly told that being adopted did not impact them."

When I was growing up, no one ever talked about adoption at all. It wasn't supposed to be an issue, so it wasn't. I was always encouraged to "look forwards, not backwards." When I became a teenager, I started to experience periods of unexplained sadness, but I didn't attribute them to adoption -- I just concluded that I must be hyper-sensitive and not quite normal.

I "succeeded" in spite of these feelings. I married a man who I treasure just as much today as I did on our wedding day in 1971. We have two wonderful daughters -- they, their husbands, and their children are the light of our lives. I have had meaningful employment in the teaching and writing fields, and today, I enjoy watching three of my grandchildren two days a week. 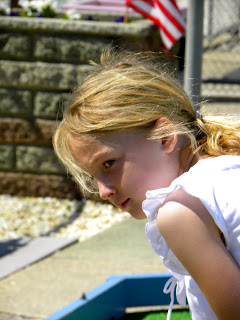 Genetic links -- this granddaughter looks like her paternal Lithuanian grandmother

But the fact that I am a content person today, blessed in many ways, does not mean that the institution of adoption is wonderful just the way it is. It took me far too long to become comfortable with myself and my own feelings because of a closed adoption system that denied the importance of genetic links.

I didn't reach out to my first mother until I was 52 years old and had already experienced a serious and life-threatening medical problem. Searching presented so many obstacles, and I was discouraged by legal and cultural barriers at every turn.  I would not have had the confidence to do it when I was younger.

I find it beyond belief that even today, people feel compelled to comment in response to adoption articles that "genes don't matter -- your 'real family' are the people who raise you.

Of course genes matter! If they don't, why does every physician I see ask me for a detailed family health history? Why does my younger daughter have the same skeletal and muscular structure as I do and unfortunately have a tendency, like me, to experience chronic back pain?

My younger daughter looks a lot like me; my older daughter resembles my husband and shares many of his character traits. Three of my grandchildren look just like their fathers; one looks like her paternal grandmother, and two look like their mothers. Only in the world of adoption, apparently, do "genes not matter." 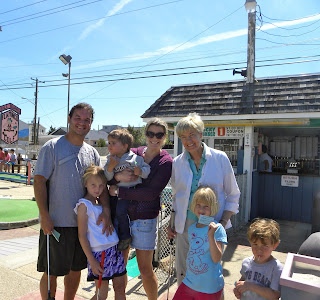 Genevieve, the granddaughter standing in front of me on the right, looks a lot like me!

I always feel compelled to add the information here -- since many people, unfortunately, equate criticism of adoption with an unhappy adoptive family -- that my adoptive parents were loving and responsible people.  No one during the era in which I was relinquished was well equipped to deal with adoption realities because the "professionals" then were simply misguided or just didn't know any better.

But today, there is no excuse for continuing the practice of amended and sealed birth certificates, and for denying full-grown adults access to their original birth certificates.  It is such an archaic and unjust system that it is amazing it continues to have its proponents.  Any institution that is predicated upon secrets and lies is not a healthy institution.  Some will argue that most adoptions are open today, so the problem has been solved.  But adult adoptees' original birth certificates remain sealed in state vaults throughout most of the United States.  Adopted adults continue to have to take all kinds of circuitous routes to obtain even the most basic information about themselves.

There are many reasons why more people don't speak out about the need for equal treatment under the law for adult adoptees.  As I explained, it took me over 50 years to develop the confidence to seek what I wanted, because of the cultural and legal barriers that remain a part of adoption in the United States today.   The laws that govern adoption need a major overhaul, and truth and justice are always values worth fighting for, especially in the complex and emotional world of adoption.

Ask A Therapist: What Are the Greatest Struggles of Adoptees?

Can we please stop the "real parents" adoption debates?

An adoptee's perspective on love and why truth matters