Facing a life-threatening illness and thinking about adoption

This past week has been the most difficult one I have ever endured.  I  had just returned from Spain, where I felt great and walked at least five miles every day.  I noticed a little bump on my thigh and had my friend, a surgeon, take a look at it.  He thought it was vascular, but scheduled an ultrasound just to be sure.  The results were concerning, so the next day I went in for a PET scan.  That day I got the devastating news that the melanoma that I had 16 years ago has returned and metastasized.

It is surreal to go from feeling just fine one day to being told that you have stage 4 melanoma the next.  I vacillate from feeling as if I am an actor in a play to feeling sick at my stomach as I contemplate what I am facing.  On the bright side, I have the best husband, daughters and extended family in the world, and I have been surrounded by caring and love every minute of every day.  My best friend can keep me laughing no matter what the circumstance. 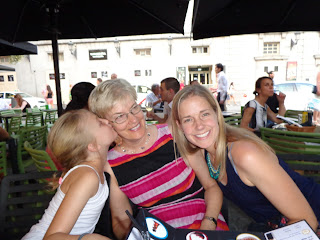 
My physician daughter was able to schedule an appointment for me with one of the best melanoma doctors in the world within the week.  There is hope, and I am going to try to hold onto it with all my might.  As she explained to me, we don't talk of curing melanoma at this stage, but in ongoing clinical trials at Penn, they are seeing partial and complete remissions in a number of patients through a combination of standard and immunology therapy.  I qualify for the trial, and after several more procedures this week and next, will be getting started.

I welcome prayers from those who pray, positive energy from those who meditate, and good wishes from one and all.  I am working hard on mindfulness exercises, as I can see already that a major challenge in all of this will be letting go, living in the moment, and controlling the racing of my mind.

As my thoughts and emotions have careened all over the place this past week, I have been thinking about why I have been so dedicated to adoption reform and adoptee rights over these past 16 years.  I was blessed with loving adoptive parents, and I found myself feeling so very close to them this past week, as I sat on a bench looking out over a beautiful cove where I had grown up sailing and water-skiing with my parents and brother.

But like many adopted people, I feel connections to other people as well.  Neither I, nor any adoptee, should ever be forced into an either-or kind of thinking, in which one set of parents is recognized and validated, and one set is not.  Having experienced the paradoxes and willful mistruths of the adoption system, I myself have no tolerance for half truths and the masking of deep truths.

Throughout my life, I have learned that the road to peace is never through falsehood, and I think that is the reason I have always felt so devoted to truth, fairness and social justice.

It is truly misguided and so very wrong for the state to attempt to block two grown adults from knowing the truth about each other's identity -- especially when those adults share such a deep, primal connection.  We cannot and should not ever block a human being's path to truth, peace, forgiveness and love.

I was told through the agency that placed me that my original mother did not want any contact with me.    With help from several enlightened souls, I found her on my own and sent her a sensitive and compassionate certified letter, asking her also for medical history.  As a human being facing a medical crisis 16 years ago, I felt that I was worthy enough to at least ask for information.  I received it, and eventually my original mother told me over the telephone that she had always loved me "in her heart."  Not every adopted person will seek out her original parents or get even that far in the journey.  Some will get further.

But how dare the state block the possibility for that love to be expressed?  How dare they?  Let people -- adults with minds and souls of their own -- find their own way.  Facing a critical illness at the moment, I can tell you with certainty that there is nothing that is more important than love.  Nothing.  Please, let's let the light, the truth and the love overcome the misguided fears and the ideology.

In Life and in Adoption, History Matters

I have just returned from a three-week whirlwind tour of Spain with my daughter, her family and 30 high school kids.  Daughter Jenn, her three children, a dear friend of mine and I spent the first two weeks based in a Madrid apartment.  The last week, when all our husbands arrived, Jenn and her family stayed on in the apartment, while my friend and I with our spouses moved up a bit to a nearby Madrid hotel.  What an adventure we had visiting Barcelona, Segovia and Toledo, and touring all the highlights in Madrid -- the world-class art museums, parks, plazas, cathedrals and royal palaces.

To visit Spain is to witness the enduring aspects of history -- the aqueduct systems designed and built by the Romans, the old Jewish quarters that remain even after their inhabitants were driven out hundreds of years ago when they refused to convert to Christianity, the cathedrals and museums that house art from the Middle Ages and in some cases, artifacts that date to the time period before Christ. 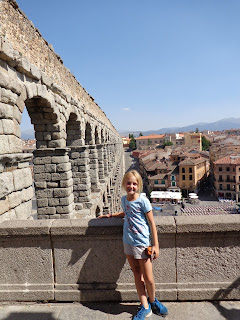 Grandaughter Grace by the Segovia Aqueduct

The fact is that before Christianity became intertwined with power and politics,  people from different faiths -- Muslims, Jews and Christians, lived together peacefully in Spanish cities like Toledo.  But from my perspective, the Christian faith became distorted when it was ordained the official faith of the land by powerful kings and queens.  The tolerance and understanding that had existed among different religious groups gave way to ultimatums and purges.

Today, we continue to see intolerance and a lack of understanding among some Catholic bishops in powerful leadership positions.  With all my travels this month, I haven't had time to post any articles on my blog.  But I remain dismayed that the Catholic Bishops in New Jersey continue to oppose an adoptee rights bill that would simply grant to adopted adults the same right to access their original birth certificates that every other American citizen enjoys.

While bishops in other states are beginning to testify in support of adult adoptee birthright bills, the  Conference of Catholic Bishops in New Jersey and New Jersey Right to Life continue to oppose such legislation -- and unfortunately base their stances on false information that has been disproved in every state that has restored the civil rights of adopted adults.

Even more depressing, the Conference this past spring hired Princeton Public Affairs Group,  a powerful lobbying firm, to represent its interests in the State Legislature.  The Bishops’ agenda in New Jersey includes opposing a bill that would extend the statutes of limitations on lawsuits for child sex-abuse cases and unfortunately, opposing the Adoptee Birthright Bill that was approved by the NJ Senate 30-8 on June 20 after it had passed unanimously 9-0, with one abstention, out of the Senate Health, Human Services, and Senior Citizens Committee.


The Bishops in New Jersey continue to insist that the issue revolves around “birthmother confidentiality,” even though the courts have ruled that no such legal right exists. The data from states that have opened birth records to adopted adults shows that most birthmothers -- 95 percent, by conservative estimates -- do want to know what has happened to their children.

Clearly, there is something else at stake here, that the Catholic Conference would spend an exorbitant amount of money to hire a prestigious firm like the Princeton Public Affairs Group to obstruct bills that would give a voice to those who for many years have had no voice.

According to the Newark Star Ledger, the firm’s founder, Dale Florio, Esq., is the “consummate Trenton insider.”  (The Auditor: Catholic Bishops Hire New Lobbyists, June 9, 2013)  In 2009, he was named one of the most influential people in the state in “The Power Issue” of New Jersey Monthly.  He served on the Finance Committee for Gov. Chris Christie’s successful gubernatorial campaign, and was key advisor to Christie Todd Whitman during her successful primary and general election wins in 1993 and 1997.

It is truly disillusioning to see the kind of power and money that is being enlisted to distort documented facts and promote the NJ Catholic Conference’s agenda.

Governor Chris Christie, as he campaigns for re-election and considers a possible run at the presidency, says he wants to be viewed as an independent thinker who takes action based on the truth and what is right, as opposed to what is politically expedient.

The question in the coming year, as the Birthright Bill moves through the NJ Assembly, is this:  Will Gov. Christie continue to defer to the church, and its powerful lobbying group, on this issue?  Or will he respond to the will of the elected Legislature and to the evidence that has been accumulated in states that have enacted Adoptee Birthright Bills?

We would hope that there is someone in his inner circle who would counsel the latter, especially as the Catholic Conferences in states like Michigan, Georgia and Ohio have now acknowledged the facts and testified in favor of Adoptee Birthright Bills.

Representatives of Dioceses that were formerly opposed to adoptee birthright bills in states that have since passed such legislation, like New Hampshire and Maine, now say the laws have caused no problems or adverse effects on adoption.  Marc Nutty of the Diocese of Portland, Maine, says. “We know of no problems or complaints and have been pleased with the outcome.”

Catholic Charities of Atlanta, testifying in favor of a pending Birthright Bill in Georgia, stated, “We believe strongly that Georgia-born adult adoptees should have their civil right to obtain a copy of their original birth certificate restored to them.”

Gov. Christie needs to know that there is more to this issue than what he is hearing from the New Jersey Catholic Conference.  In seeking good counsel, he might start by conversing with his fellow Republican, Senator Diane Allen, who has been sponsoring Adoptee Birthright legislation and hearing testimony on the issue for the past 17 years.

Following the committee hearing on June 13, during which 17 people testified for the bill and no one publicly testified against it, Senator Allen said, “It’s a civil rights issue, and it’s appalling to me that we treat (adopted) people so poorly.  We have made them a separate class, an inferior class, because they are adopted.  How absurd is that?”

In the coming months, as the Catholic Conference and its powerful lobbyists continue to promote the myth that birthmothers were promised and desire confidentiality from their own offspring, I hope legislators will look beyond the rhetoric, absorb documented data, and remember Senator Allen’s words.