Adoption Matters (A Reflection on My Mom's Experience) 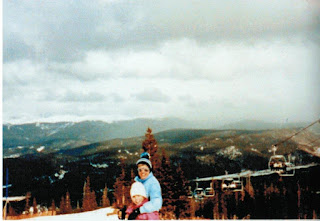 Another post by Jenn, Susan's daughter. Susan died in April of 2014 from malignant melanoma, eight months after being reunited with her sisters.

This is a picture of my mom and me from some long ago time (the 80s), on a long ago mountaintop, with her arm around me. She loved to ski and mentioned more than once that she would have been a ski instructor were she not a mom living in suburbia. This picture is so old, from so long ago, that I can barely conjure the memories to go along with it. But it matters. The fact that I was there, on that mountain, with my mom's arm around me, matters.

The same could be said about adoption. My mom, born 67 years ago this July 9th, was adopted six months later, leaving behind a 5-year-old sister she wouldn't meet for 63 years. She also left behind a mother, of course, her mother, the one whose heartbeat and voice she first knew, and would never know, save one brief phone call 50 years later in which she told my mom, "I always loved you in my heart." My mom was a secret, though, the fruit of an affair with an older, married man, a "family friend," and therefore could never be known. All she knew of this man, her father, was that he was from Denmark, like her mother, and that he was a pilot. Apparently there was a time when his son and wife were going to adopt my mom, but that never happened. Instead, she was adopted by Betty and Clarence Thomson of Haddonfield, New Jersey, where she joined her older brother, Doug, also adopted through the Children's Home Society of New Jersey. They lived a charmed life, with trips to the beach in the summer, a neighborhood full of friends (one of whom my mom would marry), and lots and lots of love. My mom is gone now, three years (the shock of it beginning to fade), and so are her parents. "No one loves you like your mom," she told me, after losing hers, in April of 2003. How lucky she was to have known a love like that.

But history, even without memory, still matters. There is a truth to my mom's life, one that extends to mine, and to my children's, that begins with how she came to be. Not knowing or being able to know that history, so personal and pertinent, she suffered. She did not die from this, of course. She died from malignant melanoma that presented itself as a tiny spot under the nail of her big toe when she was 47 years old. But the way in which that presentation resembles my mom's experience with adoption itself -- at first, pushed down into the tiniest corner of herself, and then, years later, unleashed with a wildness that could not be contained -- haunts me a bit. Adoption matters. It was a part of who my mom was, and it is a part of who I am. Time passes, but this remains. The truth remains, whether known or not.