I Feel the Need to Protect Her

Another post from Jenn, Susan's daughter. Susan passed away from malignant melanoma in April of 2014. She met her biological sisters 8 months before that.

A few things happened today, Saturday, April 30th. First, I received a letter from my church, Sacred Heart in Camden, about the House of Charity and our parish's goal of raising $51,273. I contemplated what to do. I love that church. They have been good to me and my children. I want to do our fair share to support it. But I don't know about the larger Catholic Church. I just don't know. I put the letter aside to think about it. The rest of the day was spent with my kids. Grace, my oldest, had a
soccer game in Medford, against the Medford Strikers, Carli Lloyd's old team. Though she didn't win, her team played great, and she had a few nice attempts on goal. Watching her play always, always makes me ache for my mom, who loved watching Grace play and reminded me that what I was supposed to say after a game was exactly that: "I love watching you play" and nothing more (i.e. no criticism or post-game analysis). Can you see this, mom? I sometimes think on the sidelines, watching Grace go.  I hope she can. After the game we raced home to see Grace's younger sister, Genevieve, perform in Peter Pan. She was a pirate. Watching her, so happy, dance and sing on stage, I of course thought of my mom as well, and how she would have been there. "I don't know why but I just feel a need to protect Genevieve, more than the others," my mom told me once. She would have loved to see her so happy, so in her element.

After the second showing of the play tonight, Genevieve went with a friend to the Friendly's after party, since I had to put her younger brother to bed and her dad was away. It was while I was waiting for her to get home that I happened to open the Catholic Star Herald from yesterday. This paper goes to all the dioceses in New Jersey. First I read a nice story about the Center for Environmental Transformation in Camden. Dimitrius Eliza, the 17-year-old Senior Farmer featured, is a member of my church and a phenomenal young man. I loved reading about him. Then I turned the page. This is what I saw: 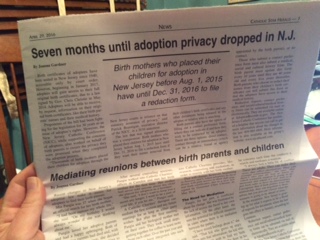 There are so many reasons that both of these articles upset me, and that they should be upsetting to any sentient human being. My reaction upon reading them was to dig out the folder with all my mom's adoption correspondence. I found her letter to the Children's Home Society in Trenton from March 11, 2003. They had just refused to forward a letter she had written to her birth mother (who had been contacted by the agency by phone and apparently indicated in a "hostile" way that she wished for no contact with my mom). I will not include the whole letter here but rather just the postscript:

P.S. You refuse to forward a single letter of reconciliation to my birthmother, who has now rejected me twice and hurt me so badly, because the action could be deemed "legal harassment"? When I have not requested a face-to-face meeting and when there was no written contract guaranteeing her anonymity in the first place? Frankly, I don't believe you could be more insensitive to my feelings and my need to heal; you are simply conducting business as usual and hoping I'll crawl back under a rock.

What are you afraid of? That this woman, elderly and probably of modest means, will sue because she receives a single letter - and a kind letter at that - about an issue she'd rather not think about? I imagine the likelihood of my taking some legal action is quite a bit higher, since I am totally committed to my rights as a human being, I am economically secure, and I am about as angry as a person can possibly be.

Please note that in 1999, the U.S. Supreme Court upheld two landmark decisions in Tennessee and Oregon, saying that the right of the adopted child to know her origins prevailed over the right of the birth parents' confidentiality. The legal tide is changing, thank God, even as your bureaucracy strives to maintain a safe and noncommittal position on the shore, all the while maintaining that you have compassion for the feelings of the adoptee. You can't have it both ways, and you have made it quite clear in your refusal to make any exceptions or compromises in my case that adoptees' feelings are always considered last, if at all. 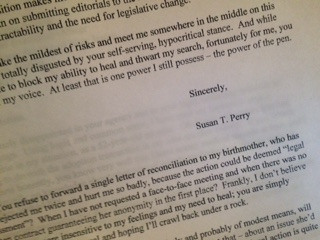 The tone of the Catholic Star Herald's articles (don't they know that in other countries the Catholic Church has apologized for its role in adoption?) has insured that I will not be giving to The House of Charity this year. It is not an easy decision for me. For as much as I am more conflicted than ever about how (if at all) I can continue to be involved in this church, I am not conflicted about my belief in God, nor my belief that God is good. Somehow, some way, my mom is with this God. Ironically, it was finding my mother's sisters, one of the greatest miracles of my life, and certainly of hers, that helped cement this belief for me. I simply felt it to be true with all of my being, even in one of the most difficult times of my life. It is because of this belief that I remain committed to keeping my faith at the center of all that I do. It is because of this that I remain committed to working for good. Whether or not I can do that as a member of the Catholic Church is something I am trying to figure out. While I work on that, I'll keep writing, and I'll keep sharing my mom's words as often as I can because ... well, just as she said about Genevieve all those years ago, I feel the need to protect her. Her and all the adoptees who are not protected at all. May God keep them close.

Click HERE (scan of physical paper) or HERE (link to website with articles -- scroll down to second and third stories) to see the two stories in The Catholic Star Herald (4.29.2016). I plan to write more about what's so upsetting about these stories, so for those commenting, please know I will incorporate your comments. Thank you.

A Life That Will Not Be Silent

Tomorrow, April 7th, is the two year anniversary of my mom's death. By the time I post this, it will
probably be the anniversary. It is also the birthday of my husband's mother, who passed away 12 years ago, when I was pregnant with my oldest daughter. Crossing the Ben Franklin Bridge this evening, over the Delaware River that separates Philadelphia from my home in New Jersey, with my 5-year-old son in the back, chatting away, I thought about that morning two years ago when my dad called me. "Mom had a difficult night," he said, "You should probably come." I was on the bridge. It seems a fitting metaphor for my life, being on a bridge at that moment. I was crossing over -- life before, with my mom, and life after. I know my husband feels the same about his life, before and after.

My mom was many things to me, most of which cannot be summed up in words. What she was to this community, of course, was "an adult adoptee advocating for her rights." Before she died from malignant melanoma at the age of 63, she had fought for nearly 15 years for justice and truth in the world of adoption. To be honest, this was only a small part of what she was to me, but it was an important part. She asked me if I would consider continuing her blog after she died, "only once a month or so, because I know how busy you are." I said I would. I am so grateful I did, because by writing here I have been introduced to many people of great integrity. I have also learned a lot. "Jenn, you wouldn't believe some of the stuff that goes on in adoption," my mom told me. She was right. In my two years of writing, I have discovered everything from simple ignorance to big-time greed and corruption, but I have also rediscovered the beauty of truth in the face of these things. Truth is a gem. Those who work to find it, will.

It felt fitting then, that today on the front page of the Spanish newspaper El País (which I read because of my job as a Spanish teacher) there was an essay, La vida que no calla (Life That Will Not Be Silenced), by Olivia, Berta, Laura, and Salvador Cáceres. They are the children of Berta Cáceres, who was killed last month in Honduras. (Click here to read more: New Yorker article on Berta Cáceres). She was an internationally known environmental and human rights activist, much more famous than my mom, of course, but her children's words spoke for how I feel about my mom, about Berta, about anyone who speaks for truth. (The entire article can be found here: El País article on Berta Cáceres). I was especially moved by the last paragraph:

The pain does not paralyze us, does not keep us from dreaming, but it will become unbearable if the world is quiet and forgets the guardian of the rivers, the keeper of life, she who also carried us in her womb, our mother, Berta Isabel Cáceres Flores.

Tomorrow, the anniversary of the passing of my mom, and also the birthday of my husband's mother, I will not forget, I will remember, the beauty of the truth, the beauty of all moms, and especially mine, Susan Thomson Perry.
Posted by Susan P. at 6:12 PM 10 comments: