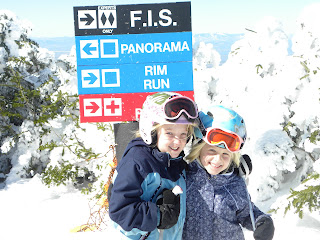 My husband and I have just returned from three glorious days of skiing in Vermont with two of our granddaughters.  For us, it was like history revisited, since Vermont's Sugarbush is where we introduced our two daughters to big mountain skiing many years ago.  Genevieve, on the right, looks just like her mother, and Grace, on the left, acts just like my older daughter did -- protective of her little sister as they looked for hidden trails and little jumps together.  My time on our I-Pad was limited, since Grace had downloaded about 30 games for the long car ride up, but I did check up on the news occasionally.

How encouraged I was to see that Ohio Right to Life (ORTL), in a dramatic turn-around,  had actually testified in favor of an adoptee rights bill that would allow adopted adults to secure their original birth certificates (OBCs) just like any other citizen.  For years, influential Right to Life groups have testified in opposition to such bills, fearful that they would discourage adoption and perhaps increase abortion rates.  Finally, Ohio Right to Life has come to understand the facts -- that treating adopted adults equally under the law will not encourage women to choose abortion over adoption.

Here's what Stephanie Krider of ORTL told Ohio's House Judiciary Committee in support of the bill that would permit people who had been adopted in Ohio between 1964 and 1996 to secure their OBCs: ..."for faulty reasons for decades, Ohio Right to Life opposed opening adoption records to adoptees born/adopted between 1964 and 1996" because they believed birth mothers had been guaranteed rights of confidentiality and the measure would protect adoptees from potential embarrassment about the circumstances of their birth or from unwanted contact from birth parents.

"Frankly, these are outdated concerns. ..."

She went on to explain that "cultural values have changed" and that being an adoptive parent or relinquishing a child for adoption no longer carry the stigma they once did.

"It is our belief that supporting (this bill) ... would not be a disservice to birth mothers who have placed their child for adoption. Legal guarantees could never have been made to these mothers to ensure their children would never have access to their original birth certificate.

Krider also emphasized that Ohio Right to Life encourages adoption instead of abortion for women who may be facing an unwanted pregnancy. "If we had any reservations about this bill and the effect it would have on chances of women choosing abortion over adoption," she said, " I would not be standing before you in support of the measure today."

Like Krider,  Jaime Miracle of NARAL Pro-Choice Ohio, also testified in favor of the bill.    While allowing adoptees to access "important family medical information," she explained, the bill also works to protect the privacy of birth parents by allowing them to express their desire for or against being contacted by the adult adoptee.

"This system will, in fact, better protect the privacy of birth parents by creating a system where they can express their preferences for being contacted, which currently does not exist."

Both Krider and Miracle have expressed the truths here that adoptee rights activists have been presenting for years.  Allowing adopted adults to secure their OBCs does not discourage adoption, and it does not encourage abortion.  Statistics from the states and countries that have opened up access prove that this is so.  Original mothers were never guaranteed confidentiality from their own offspring, as every state always had some mechanism by which the records could be opened.  Adopted people find their original families every day, using social networks, and often information from their own adoption decrees.  Without adoptee rights bills, original parents have no way to indicate their desires -- whether they are open to contact, they would prefer not to be contacted, or they would prefer to be contacted through an intermediary.  Most adoptee rights bills, like the one proposed in Ohio, give the original parents the opportunity to express their preferences.

Data from open access states indicates that the vast majority of relinquishing parents are open to contact.  What a breakthrough that Ohio Right to Life has finally come to recognize this reality.  We can only hope that other Right to Life chapters will follow suit.  The way to promote adoption is not to deny equal rights to adopted people; it is to treat adopted people with the same respect that we afford everyone else.

Adoption and Abortion: It's Not as Simple as Many Pro-lifers Think

Adoptive Parents and Pro-lifers who Cannot or Will Not See the Realities of Adoption
Posted by Susan P. at 8:21 AM