My o-mother passes on, and my sisters lift me up

My original mother passed away earlier this week at the age of 90.  Several weeks ago, she suffered what appeared to be a minor stroke, but all of her organs seemed to break down rapidly, and my sisters tell me that she passed peacefully and rather quickly in the hospital, saying, "I just want to go to sleep."

I was not with my sisters because my o-mother never became comfortable with the idea of publicly acknowledging my existence.  As I said to my sisters Janet* and Eileen,* she always remained kind of a ghost for me, someone I could never really get to know.  The sisters tell me that she was emotionally closed her entire life through and kept many details of her life private, even from them.  For example, my older sister Janet has no idea who her father is -- her mother told her that it was none of her business, and that she didn't need to know.

I don't know who my father is either -- my o-mother told me in a phone conversation ten years ago, "I can't tell you anything about your father.  He was a married man."  Whether she still thought she was protecting people (my o-father has long been deceased), or just protecting herself, I have no idea.  As Janet told me in our first phone conversation, "Our mother was always looking for love in all the wrong places."

My sisters had a long and rocky relationship with their mother, but she was their mother, and they remained loyal and loving caregivers for her until the end.  Following her stroke, Janet came to stay with her Mondays through Fridays, and Eileen took her to her home during the week-ends.  Both sisters and other extended family were with my o-mother when she passed.  And rather than send me an e-mail, Janet picked up the phone and called me when she died.

I admire my sisters so much for caring for their mother, even though she could be difficult and often fell short in caring for them.  They saw her limitations clearly, but they are loving souls who also see that life is what it is, not always what we would like it to be.   They recognized that their mother had some mental difficulties, and still kept sharing their love and caring, even when it was not reciprocated.  Sometimes in life, the strong must step up to help care for the weak. 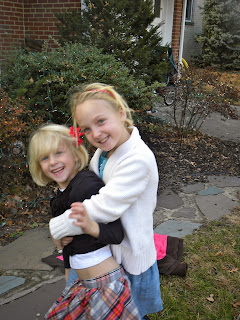 My two granddaughters -- the sister bond can be so very strong!

I am so blessed to call these two women my sisters.  They express so much concern for me even amidst all the emotional turmoil they are now experiencing.  For example, following my o-mother's passing, Janet sent me this message late at night:

"Dear Susan,
I am lying here in bed hoping Mom has finally found peace and happiness she never found in life.  There is so much about Mom that she would never share and now we will never know.  The thing Eileen and I are most upset about is that she didn't let us make the decision to contact you ten years ago.  There was just so much that we could have shared with each other and our families.  I can't begin to thank Jenn (my daughter) enough for sending that letter (introducing herself, her children and me, and asking if Janet would be open to contact).  It was the beginning of something so special I still can't find the words.  You have a place in our hearts forever.  Please take good care of yourself and I will keep in touch.
Love,
Janet"

I wish every adoption attorney, agency official, legislator and religious group that opposes adoptee rights would read this post and then tell me to my face why they think it is their right to deny me my own original birth certificate and make it difficult for me to ascertain the basic truths about my own life. How can they not see how discriminatory it is to treat an entire minority group differently by law than we treat everyone else -- especially now that we have hard data to show that adoptee access bills without restrictions work best for all concerned parties?  This is an intensely private subject that should interest only those people who are directly involved.  Adults must be trusted to handle their own affairs competently, just as they are in every other area of life.

If the naysayers had had their way, and had I not taken active steps to circumvent the archaic and completely discriminatory adoption laws now in place, I never would have experienced Janet's or Eileen's love.  In a short and poignant message, Eileen sent me this note after her mother's death:

"Thank you so much for your love and kindness.  Not knowing you was definitely our mother's greatest loss.  Praying for great results on Friday (I had a CAT scan this morning) -- love you.
Eileen"

Could anyone ask for more supportive and loving sisters?  What a gift they are to me, especially now, as I am facing a challenging medical situation.  They truly lift me up, and I am blessed.


*I am using pseudonyms in this post, as it contains some private communications and information that I prefer not to air publicly.
Posted by Susan P. at 11:37 AM