Surrounded by Love -- No More Secrets 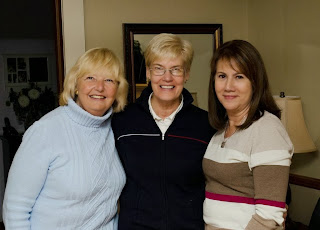 
I returned home several weeks ago from a long and exhausting day at the hospital where I am being treated for metastatic melanoma to find a large package on my front step.  My husband Ty brought it inside and opened it.  Inside was a soft, warm throw from one of my recently-found sisters, Carol, along with homemade Christmas cookies for my grandchildren.  "Thinking about you with love," the note said.  "Thought you could use this throw as you rest."

A few days later, after I got a CAT scan showing that my pancreas was inflamed and that we would have to suspend treatment for a while, my other sister Jo, who I first met in late September, sent me a slide show she had assembled from pictures on my daughters', her family's, and my own Facebook pages.  Entitled "Surrounded by Love," it featured uplifting music and pictures of our families, my grandchildren, and a few other scenes that stir my soul, like the waves rolling in, one after the other, at the beach.  (To see Jo's creative talent, click here.)

Both Carol and Jo have surrounded me with love since we found each other in September, and ours is a reunion story that seems quite miraculous to us all.  (You can read more about that unfolding of events here.)  But as my daughter Jenn says, "It shouldn't take a miracle to find people to whom you are related by blood."  In New Jersey, thanks to Gov. Chris Christie's veto of adoption reform legislation in 2011, the birth certificates of adopted adults remain firmly sealed, and adopted people attempting to unearth their own histories must continue to circumvent the law.

I'll point out here what I've explained in other posts -- that I first contacted my original mother over ten years ago, and while she did share some information, she had no desire to meet.  When I found my sisters in the fall, we did not tell my original mother about our reunion, as she was elderly and in frail health, and we had no desire to hurt or upset her.  But as Carol said to me during one of our early phone calls, "I am 68 years old -- what is the point of all this secrecy?"  In what other area of life, except for adoption, are adults treated like perpetual children, incapable of handling the most personal details of their lives with competency and sensitivity?

When I first started writing about my sisters, I used pseudonyms for them, out of respect for my original mother's desire for privacy.  But my original mother passed away at the end of October, and there is no one left to hurt.  My sisters' love for me has been such a gift during this emotionally and physically trying time for me, and I believe very strongly that our meeting has an unexplainable spiritual dimension.

As Carol wrote to me last week, "Susan, you have brought such joy to my life in this short time.  I do not mind at all your using my real name on your blog.  I am so glad everything is out in the open now -- no more secrets."

Carol Dowlen and Jo Pierson, I am so proud to call you my sisters.  Your presence in my life does not replace the love I feel and have felt for my adoptive family, but it adds to that love in such a profound way, and it has given me such a lift as I battle this cursed disease.

And Gov. Christie, it is not often in life or in politics that you have a second chance to do the right thing and be on the right side of history.  You in all likelihood will have that chance should adoptee rights legislation be approved in the Assembly, just as it was during the last legislative cycle.  As I'm sure you know, it has already passed overwhelmingly in the Senate.  I hope and pray that you will come to understand this issue for what it is -- the human right for those affected by adoption to navigate their own personal histories without government obstruction and interference.